The People of Christ Missionary Baptist Church (P.O.C.) was conceived

in the mind of Pastor Willie C. Rolland by the inspiration of God in late

and Sister Rolland; on Shakespeare Court in Tracy, California.

With several families in attendance, the first organizational

meeting which included a pancake breakfast, was held on April 14, 1996.

In 2007, POC obtained all the necessary permits to go forward with the

plans and the construction of our new edifice located at 11473 Larch Road,

In 2007, the People of Christ Church Family purchased two plus acres

of land for the site to build an edifice for worship services. In 2004,

our church family applied for a building permit. This began a struggle

with the city of Tracy that is not reached the last hurdle yet. To our surprise,

even though our property is in San Joaquin County, the city of Tracy

has the water rights. After checking with the county about zoning

churches, we submitted our application to build, only to find out

that the city would not serve the site with water, even though there

is a water line in the street; the challenge began.

After over two years of struggling, we were able to get the city council

to agree to serve water to the property.

Thank God for giving us a spirit of perseverance. But, the battle is not over.

You see they agreed to serve water, but limited the size of pipe to be used

and of all things it is not large enough to service a fire sprinkler, which the

city fire department requires. We are currently trying to resolve this issue

without digging a well that will add significantly to the cost of construction.

God is Good and He is in control; He promised, He will not leave us nor

forsake us.   He has blessed us to begin the work and we are pressing on

in the name of the Lord;   "Being confident of this very thing, that he

On Sunday, August 8, 2008 the People of Christ Church family held the

inaugural service in their new sanctuary; the first African-American

church built from the ground up in Tracy’s history. 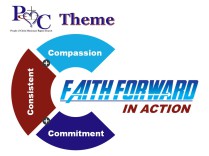